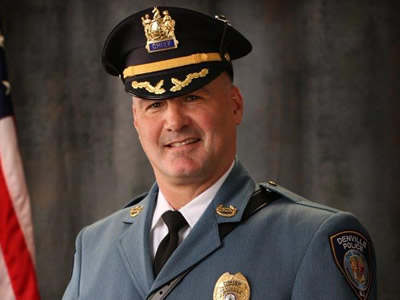 I actually began my law enforcement career just a couple of weeks after turning 20. While my father and older brothers and I were volunteer firemen, I was the first one in my family to become a police officer. I wanted to help people and solve problems, so law enforcement was very attractive to me. I’ve spent my entire law enforcement career at the Denville, N.J. Police Department. I have worked in every division within the department including community services and DARE education – I was an SRO before the term “SRO” became widely used. I’ve also spent time in internal affairs, the patrol and administrative divisions within which I served as commander. I moved from officer to detective, sergeant, lieutenant and then, in November of 2007, I was appointed the 7th Chief of Police in Denville.

In addition to your work in Denville, you’ve also held a number of organization leadership positions during your career – tell us about that.

That’s a lot of work and responsibility. What drove you to continue engaging with and attaining leadership positions in these organizations?

Can you give me an example which illustrates a successful drive toward positive change?

A couple of years ago, in the midst of a great deal of the negative media coverage police shootings garnered, I asked the executive director of the NJ State Association of Chiefs of Police to convene a new committee to focus on building Police/Community relationships. As the leader of this committee, I sought out leaders from civic groups including the NAACP and the NJ Latino Leadership Alliance. I brought these community leaders and members of their associations to the Morris County Police Academy to meet with a number of chiefs of police and also to actively participate in our state-of-the-art firearms training simulator, which demonstrates “shoot, don’t shoot” scenarios. Doing this enabled the community leaders to better understand why shootings happen, why we shoot, how fast bullets fire and overall, gain a stronger appreciation for all aspects of use of force in policing. This program was so impactful for the leaders, that Roslyn Brock, the National Board of Directors Chairman of the NAACP, came to Morris County to see our firearms training facility – and she came with the media. She said she had a newfound respect for policing and the split-second decisions police are faced with in situations requiring use of force. This was probably my proudest moment in problem solving Police/Community relations. It underscored that it’s not enough that police know how hard it is to perform their responsibilities – community leaders need to understand that as well. This program truly built partnerships and bridges which continue to add value in our communities today.

A similar accomplishment I am proud of came after the Newtown, CT school shooting. After that tragedy I met with local school leaders to understand their fears and concerns. I heard a consistent chorus of wanting officers in schools. Headcount and budgetary constraints precluded me from fulfilling that desire directly, but I was able to achieve this goal by having legislation drafted to create a new class of Special Police Officer. This new class was comprised of retired officers who worked part-time, at a reduced pay scale and solely in schools for the purpose of providing security. This program became so successful that Governor Chris Christie signed the legislation into law in November.

I believe these two accomplishment examples show that listening is necessary but not sufficient. To be an effective leader, one needs to go beyond listening and drive positive change. To me, it’s not enough to just understand the problems. Problem identification is just step one – an effective leader needs to at least try to solve the problem – try to make the situation better. I sincerely enjoy being a problem solver in the law enforcement arena and want to focus on the most serious problems we face.

I understand you are running for the 4th Vice President of the International Association of Chiefs of Police. My guess is your strong desire to tackle the most serious problems law enforcement faces is a big part of why you are running?

Absolutely. When I think back to when I was 20 and first entering law enforcement, it was work ethic, passion and determination that got me that job. Those three character traits have strengthened in me over time and I want to utilize them to give back to our law enforcement community and help attack our most serious problems.

Tell about a problem you would focus on from the IACP platform.

A major problem our profession faces in addition to community relations is this newer phenomenon in which police are being ambushed and killed. I will always have a focus on the safety of police. Officers have the right to and need to come home to their families at the end of their shifts. According to the National Law Enforcement Officers Memorial page online, officer fatalities from gunfire have increased 63% from last year. This is an alarming problem which I will focus on going forward.

You’re relatively young for someone with the amount of leadership experience you have. What does the future hold for you?

Thanks to both my policing and my leadership experience, I have acquired a great deal of knowledge and perspective on law enforcement. My goal now is to continue to lead and give back. I want to build bridges and have a focus on safety. Beyond that – the future could hold any number of opportunities and I am excited to continue on my path.

It’s been a pleasure – thank you for your time today.